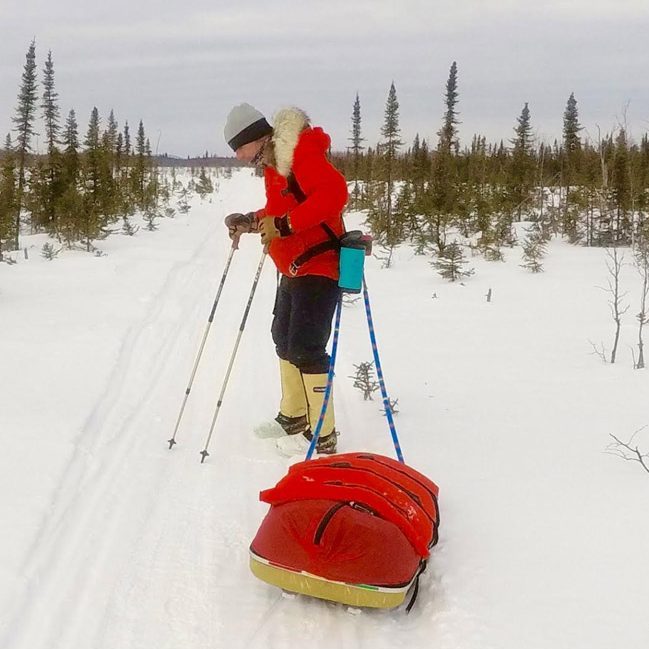 Pete wanted to be a sled dog musher and moved to Alaska in the early 2000s to run dogs. But he found managing the dogs too overwhelming and in 2006 he and his wife moved to Asheville where he worked as a teacher and ran the Black Mountain Running Co. shop for several years.

“I’ve battled depression and voices throughout my life, turning to running to help inspire a personal change. I ran my first marathon in 2008, and continue to push the boundaries of my physical and mental capabilities.”

“I decided I wanted to run a marathon one day and had my wife dump my sorry ass on the Ridge Parkway. I waddled 13.1 miles towards Mt. Pisgah and turned around and made it back to finish what would end up being my very first “homemade” marathon. I’ve run well over 100 since!”

Pete started running marathons to raise money in memory of his mother who had died of cancer. Over four and a half years, he completed a marathon in all 50 US-states and raised $62,000.

He found his real passion in Iditarod Trail Invitational, the longest winter ultra marathon in the world.
The self-sufficient Iditarod had been a dream since childhood.
It took him three attempts and almost his life to win the cruel 1000-mile race, testing his endurance, mental fortitude, and resilience.

In 2014, Pete took part in the 350-mile Iditarod to raise money for the Asheville-based Hope Chest for Women, which offers financial and other assistance to women in Western North Carolina with breast and gynecologic cancers.
With little ability at channeling a sled dog, he pulled a 90-pound sled and came in last.

“After nearly drowning during the 2016 ITI Foot 1000, I returned to Alaska in 2018 determined to finish what I started,” Pete says.
He completed the 1000-mile journey across the Alaskan wilderness, -50F temperatures, a brush with death, howling wolves, unrelenting determination with a first-place finish at the 2018 Iditarod Trail Invitational (ITI) in the Foot 1000 category.

“You come down a hill, and look up and there’s another hill. So many times I would lean over my poles, put my head down and cry. Mentally it’s so hard to keep going and going. You just want to lay down and have someone pick you up and take you home,” he said.

He started off February 25, 2018 at Knik Lake, near Anchorage, Alaska, with 21 other racers.
“I was one of six ultra-athletes to compete in this year’s ITI 1000 Foot category. Of the six competitors, only two crossed the finish line as gale force winds, -50F temperatures, and waist-deep snow forced many of my competitors to drop out early.”
The other participants were on fat-tire bikes and cross country skis.

“I don’t know how I have this strength. My parents were pretty tough. I think I have a lot of angels from the heavenly realm looking down on me.”

Joar Leifseth Ulsom of Norway, who won the sled dog race in 9 days, 12 hours, received $68,000 and a new truck.
Pete won a patch, a T-shirt and a handmade ceramic coffee mug.
“I didn’t do this to win a bunch of stuff, but it’s pretty humbling to see what the sled dog racers win,” Pete said.

I’m now turning my attention to sharing this story with the masses in hopes of inspiring others to live outside their comfort zone and chase what’s important.”