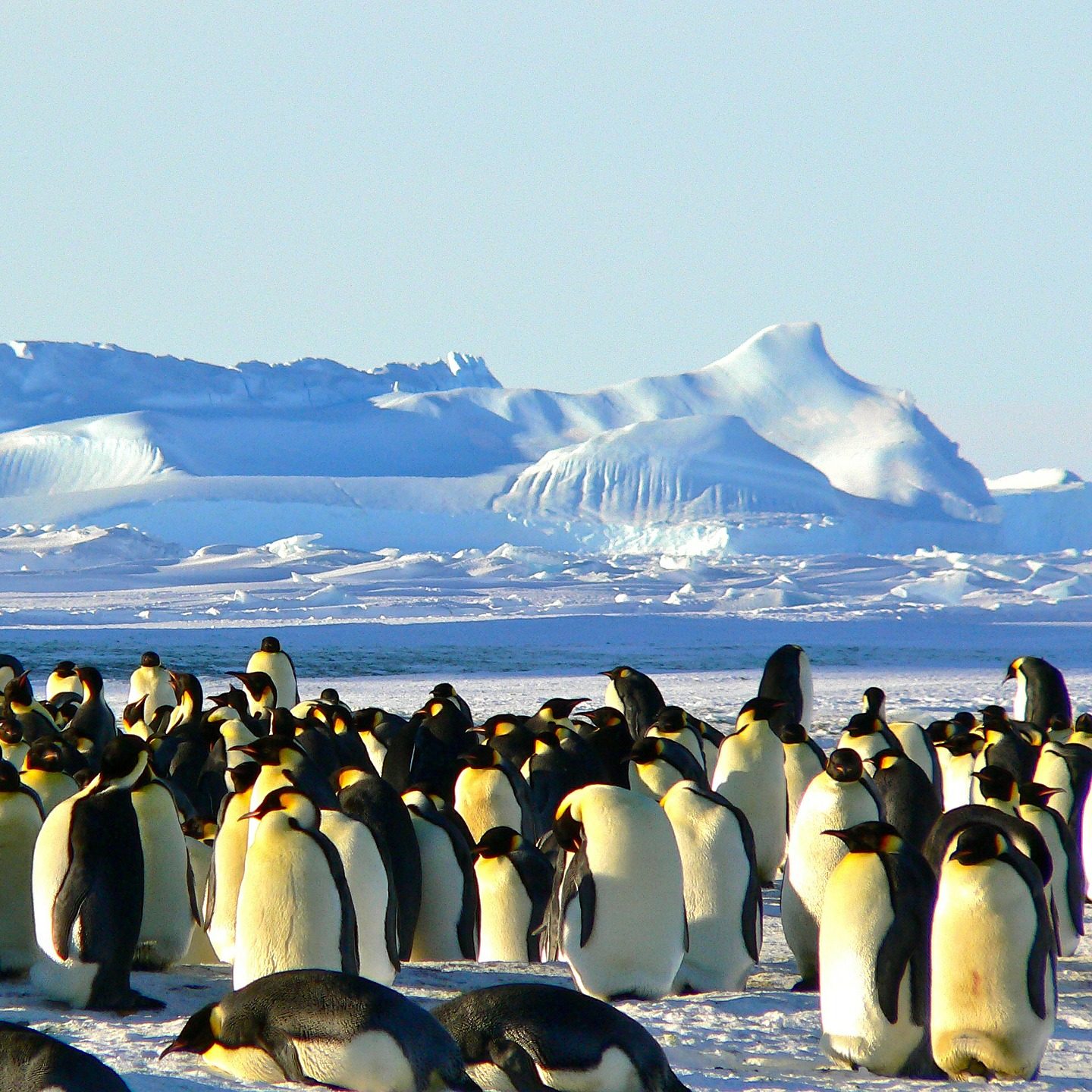 The Last Desert explores the pristine scenery of snow, ice, mountains and waterways and wide variety of wildlife including penguins, birds, whales and seals.

Competitors may visit these ten locations during The Last Desert (Antarctica). All locations are weather permitting:

The Aitcho Islands (‘Aitcho’ standing for ‘H.O.’ i.e., ‘Hydrographic Office’) are a group of minor islands in the north entrance to the English Strait separating Greenwich Island and Robert Island in the South Shetland Islands, Antarctica, and are situated between Dee Island to the south and Table Island to the north. The islands were mapped in 1935 during the oceanographic investigations carried out by the Discovery Committee and named after the Hydrographic Office of the UK Admiralty.

Competitors in The Last Desert 2007 completed their first stage on Aitcho Island.

Deception Island is a near circular shape with a diameter of about 12 kilometers / 7 miles. Its highest point, Mt. Pond, has an elevation of 542 meters / 1,778 feet, and over half of the island is covered by glaciers.

Long ago, volcanic pressure on Deception Island resulted in a tremendous eruption that caused the island’s peak to explode. The resulting caldera flooded with seawater, creating the unique landmass that competitors may visit today. Thousands of Chinstrap Penguins inhabit the volcanic slopes of the island, along with nesting Pintado Petrels and Antarctic Terns.

Nestled among the South Shetland Islands, Deception Island is easily recognized on a map by its horseshoe shape. Its collapsed volcanic caldera is breached at Neptune’s Bellows and makes for one of the world’s safest natural harbors, despite the volcano’s periodic eruptions. Ships enter the relatively calm waters of Port Forster (12 kilometers / 7.5 miles wide) through the caldera’s breach that is surrounded by snow-covered hills that reach 580 meters / 1,900 feet. The island has an interesting history – it was a base for several early exploratory missions – and is still a disputed territory between the Argentineans and the British.

The volcano is still very active and its eruptions have caused evacuations and considerable damage to the stations there (during the 1920-21 whaling season the harbor water boiled and stripped the paint off the ships’ hulls). The most recent eruption was in 1991-92.

Part of what brings ships to the island is that the volcanic activity thermally heats the waters of Pendulum Cove (so-called because of the British pendulum and magnetism experiments held there last century) and competitors can take a dip. It’s not deep enough for swimming. You do have to be careful, however, because if you move even a meter from the warm water you might find your skin blistering from a near-boiling patch or goose-bumping from an unheated patch. There are large colonies of Chinstrap Penguins on the exterior coast, but few marine animals enter the harbor because there are numerous volcanic vents that heat the water to several degrees above the sea surrounding the island.

Dorian Bay is a cove on the northwest side of Wiencke Island, located 0.5 mile E-NE of Damoy Point, in the Palmer Archipelago. British and Argentine huts may be found on-site. Damoy Point is the north entrance point to Port Lockroy harbor and on the west side of Wiencke Island in the Palmer Archipelago. The point was discovered and named by Charcot’s French Antarctic expedition (1903-05).

From inner Dorian Bay, the land rises gently from a bare, rocky landing to two huts, one a well-maintained and stocked British refuge hut, the second a small Argentinean hut. The landing area below the huts is a minor sand beach, interspersed with many glaciated, polished rocks. Behind them the land rises gently on one side to a rounded, bare hilltop 30-40 meters above sea level. On the other side a steep snowy slope leads up onto the end of a glacier. The site’s outcrops are mainly low, smooth and polished. At an elevation of 6-7 meters above sea level, there are outcrops nearly covered with many small and well-rounded fragments of granitic, gneiss/schist, and other materials. British and Argentine huts are located on site.

The Argentine Base Esperanza (Spanish “Hope Base”) is located in Hope Bay, Trinity Peninsula, Antarctic Peninsula. Built in 1952, the base houses 55 inhabitants in winter, including 10 families and 2 school teachers.

There are remains of an expedition hut from a Swedish expedition that wintered there in 1903. The Argentine Esperanza Research Station, Adelie Penguins and Snowy Sheathbills are some of the highlights. Esperanza Base has some measure of fame because it is the birthplace of Emilio Marcos Palma, the first person to be born in Antarctica. The Base’s motto is “Permanencia, un acto de sacrificio” (“Permanence, an act of sacrifice”).

Competitors in The Last Desert 2006 completed the Antarctic continent’s first 100-mile stage on this location.

King George Island is the largest of the South Shetland Islands. There are numerous international research stations on this island including the Polish Arctowski Station and the Brazilian Ferraz Station Admiralty Bay. On the western side there are Russian, Chilean, Chinese, Korean, and Uruguayan stations. Competitors may have an opportunity to visit one of these stations while completing a stage on this island.

Neko Harbour is a harbour in Antarctica on Andvord Bay, situated on the west coast of Graham Land. Neko Harbour was discovered by Belgian explorer Adrien de Gerlache in the early 20th century. It was named for a Norwegian whaling boat, the Neko, which operated in the area between 1911 and 1924.

Competitors ran in this location in The Last Desert in 2007, 2008 and 2012. Ice crashing into the sea, also known as “calving,” can be heard from this location. This location offers stunning views but also a large hill which competitors have to traverse.

Competitors in The Last Desert 2006 and 2016 competed in this location. It offers spectacular views.

Petermann Island is a small island just off the west side of the Antarctic Peninsula of Antarctica, located at 65 deg 10 min S, 64 deg 10 min W, just a short distance south of Booth Island and the Lemaire Channel. Just 2 kilometers long, the low rounded island is home to the world’s southernmost colony of Gentoo Penguins and also hosts a number of Adelie Penguins. The island was discovered by a German expedition of 1873-74, who named it after geographer August Petermann. The French Antarctic Expedition of 1908-10 wintered over aboard ship in a cove on the southeast side of the island, named Port Circumcision because it was spotted 1 January 1909, the traditional day for the Feast of the Circumcision. Huts built by the expedition are gone, although a cairn remains, along with a refuge hut built by Argentina in 1955, and a cross commemorating three members of the British Antarctic Survey who died in a 1982 attempt to cross the sea ice from Faraday station to Petermann.

Competitors in The Last Desert 2008 competed in this location. It is one of the most beautiful locations in Antarctica.

Port Lockroy is a natural harbour on the Antarctic Peninsula of the British Antarctic Territory. After its discovery in 1903 by the French Antarctic Expedition it was used for whaling and British military operations (Operation Tabarin) during World War II and then continued to operate as a British research station until 1962. In 1996 Port Lockroy was renovated and is now a museum and post office operated by the United Kingdom Antarctic Heritage Trust. It is designated as Historic Site no. 61 under the Antarctic Treaty and one of the most popular tourist destinations in Antarctica. Lockroy was named after Edouard Lockroy, a French politician and Vice President of the Chamber of Deputies, who assisted Jean-Baptiste Charcot in obtaining government support for the French expedition.

Weather and time permitting, we will visit this location to see the museum.