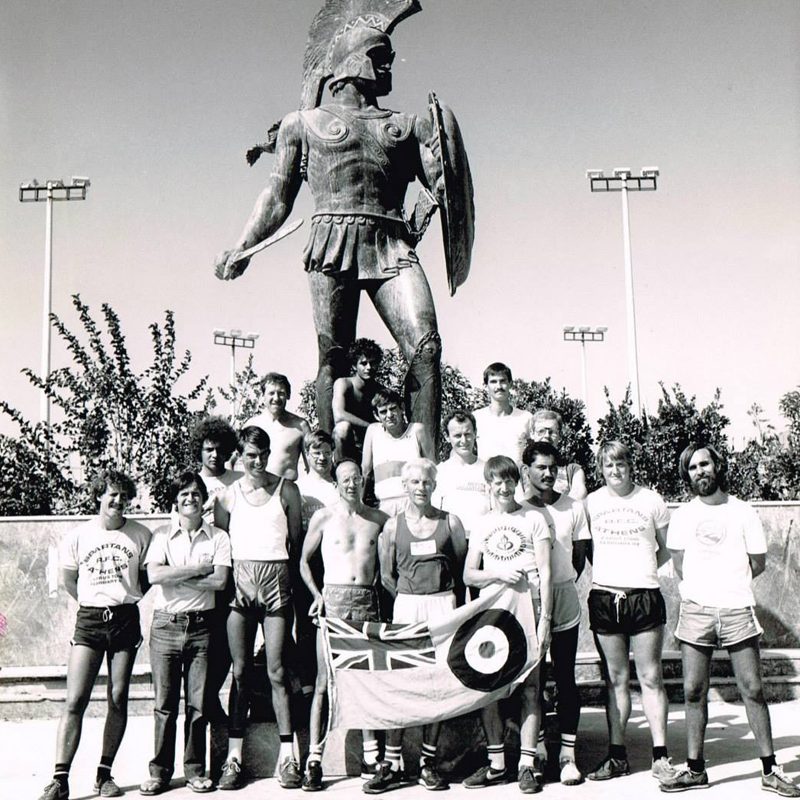 The traditional story relates that Pheidippides (530 BC–490 BC) was sent to Sparta to request help when the Persians landed at Marathon, Greece. He ran 246 km (152 mi) in 36 hours. He then ran 40 km (25 mi) from the battlefield near Marathon to Athens to announce the Greek victory over Persia in the Battle of Marathon (490 BC) with the word νικῶμεν (“We have won”), to then collapse and die, probably from exhaustion and dehydration and lack of fuel.

To honor Pheidippides, the Marathon was initiated. It was one of the original modern Olympic events in 1896, though the distance did not become standardized until 1921.
The Athens Marathon which is held every year in November, still follows the route from Marathon to Athens, though not exactly the way Pheidippides ran it.

Born in Australia, but as a lover of Greece and student of ancient Greek history, John Foden read Herodotus’ narration. As a long-distance runner he wanted to find out or he could run the route that Pheidippides was said to have taken from Athens to Sparta.

John approached Michael Callaghan, a member of the British Hellenic Chamber of Commerce in Greece. Michael was one of the few who took this project seriously and started to gather sponsors.

After 4 years of studying and preparing for it, the 5 British RAF officers traveled to Greece in 1982 on an official expedition.
They followed the route description of historian Herodotus to find out or covering 246 kilometers in a day and a half was indeed possible for a human being.

John Foden, at age 56, and 2 other runners completed the distance; John Foden in 37:37, John Scholtens in 34:30, and John McCarthy in 39:00. When they arrived in Sparta in front of the statue of Leonidas, they kissed his feet. The historical Spartathlon was born.

Michael Callaghan’s support has been essential. Without his efforts, Spartathlon might never have come about and John Foden’s ideas may have been forgotten.

Since 1983 this race takes yearly place on the last Friday in September and attracts ultrarunners from all over the world who are also eager to run in Pheidippides’ footsteps, thanks to the International Spartathlon Association and many volunteers.

At a high age John Foden looked back at his story with joy.
He passed away at age 90, leaving an impressive legacy.