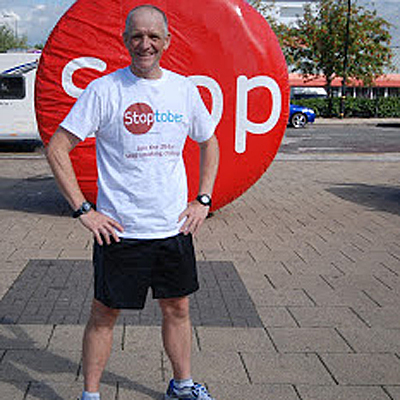 Being an overweight 40-a-day smoker and hardened drinker that managed to run just 100 meters Rory Coleman decided on January 5, 1994, to live the rest of his life to the full, nicotine- and alcohol-free.

In just three months he lost three stone in weight and ran a half-marathon, going on to complete his first full marathon later that same year.
When he ran the London Marathon in April 1995 Rory enjoyed the experience so much that he ran another marathon the following weekend, and the one after that.

The British runner still lives up to his New Year’s Resolution of 1994. The races just became longer and the terrain tougher.

In 2013 Rory ran 28 marathons in 28 days to support the UK government’s stop-smoking campaign ‘Stoptober’ while pushing a giant inflatable STOP Ball.
On the final day Rory clocked a great time of 1:49:07 in the Cardiff Half Marathon and… this was after getting up at 3:30am to get 15 miles in before starting the race.
He wouldn’t have been capable of covering 784 miles on foot in 28 days if he hadn’t made the decision all those years ago to quit smoking and get himself into a completely healthy place!

Stoptober is a 28-day long event that’s held each October to encourage and support people to stop smoking. The campaign is founded on the evidence that if smokers can quit for 28 days, they are five times more likely to quit for good. Public Health England created the annual campaign and continues to fund it, but it’s spread to other countries around the world as well.

The idea is that participants pledge themselves to not smoke during the 28 day period, with a mind to giving up altogether.

According to Cancer Research UK, tobacco is the leading cause of preventable death in the world, causing at least sixteen different types of cancer. There are a vast number of health benefits to quitting smoking, and research has shown that if you can stop for 28 days, you are five times more likely to be able to give up smoking for good. There is also evidence that ‘social quitting’ i.e dividing to quit with others, increases the chances of permanently quitting smoking. Stoptober provides the support and resources to help people do this.

During Stoptober, there is free support on offer to help people quit including stop smoking medications, Facebook groups, an app and face to face support from local stop smoking services. Since the launch of Stoptober in 2012, it has supported over one and a half million quit attempts and is the largest and most popular mass quit smoking event in the UK.

Although Stoptober is a campaign in its own right it is now part of the wider British One You program.
One You is the PHE program that helps adults across the UK to make small changes to their lifestyle that can have a big impact on their future health. In addition to encouraging people to stop smoking, One You also tackles other everyday habits and behaviors such as eating too much unhealthy food, drinking more than is recommended and not being active enough.

Stoptober encourages as many smokers as possible to prepare to quit from 1 October by taking part in the campaign and utilizing the range of free resources and support available, to make it through the 28-day smoke-free journey.

Since 2014 the campaign is also being held annually in the Netherlands.