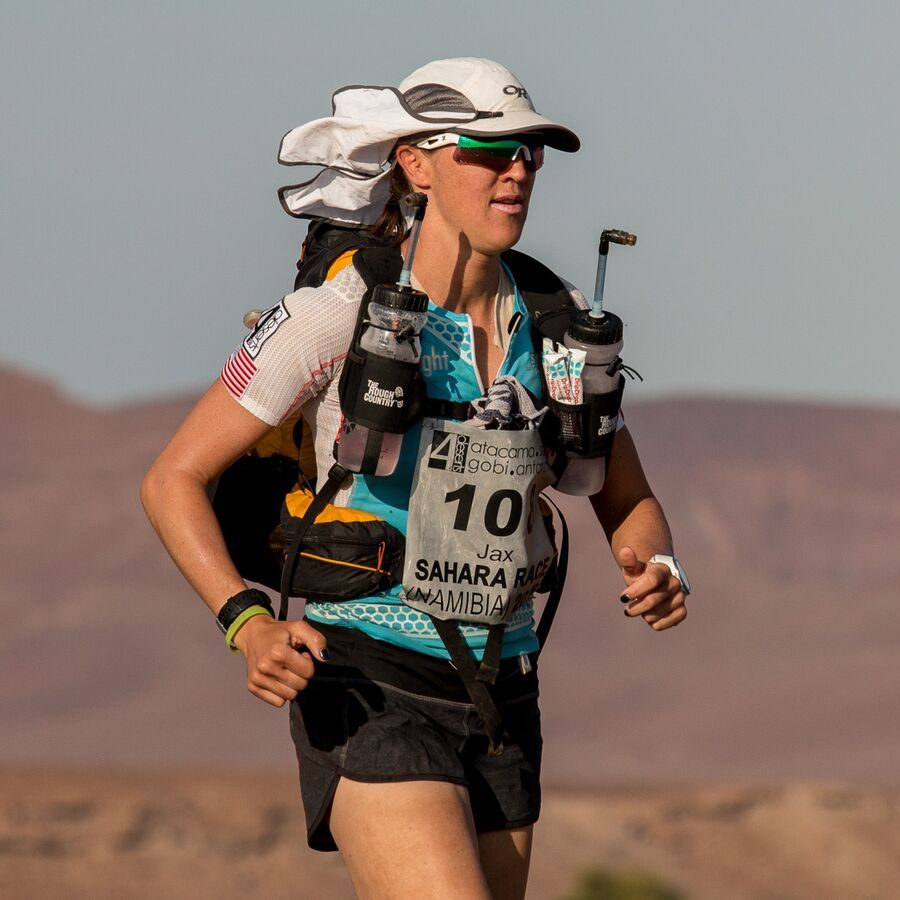 Jax aims to become the 1st woman to win a stage race on each continent as a way to inspire people to get active and outside.

She has been a runner since she was 5 years old.
After her duathlon and triathlon career she came back to running and found her passion in multiday races.

Jax is known as “The Queen of the Desert” and one of the top-ranked and most decorated females in self-supported stage racing in the World.
She was the first woman in the world to complete the 4 Deserts Race Series Grand Slam Plus.

The 4 Deserts Race Series, founded by Mary Gadams, takes place in the most challenging, pristine and culturally-rich locations in the world. The four annual events take place across the world’s most varied terrain and are located in the driest, windiest, hottest and coldest deserts on Earth: Atacama Crossing (Chile), Gobi March (China/Mongolia), Sahara Race (Egypt/Jordan/Namibia) and The Last Desert (Antarctica).

To complete the 4 Deserts Grand Slam Plus, you must successfully complete these four races and the RacingThePlanet Ultramarathon, all within one calendar year. The location of the Ultramarathon changes every year; in 2016 it took place in Sri Lanka.

The race format starts with four stages (days) in a row with 22-28 miles per day. On day five, racers run approximately 50 miles (known as the Long March) followed by a rest day. On the 7th day, athletes complete the 250k (155 mile) journey with a 10k jaunt to the finish line.
Athletes must be self-sufficient, carrying everything they need to survive on their backs. The only support from staff is hot and cold water, medical treatment, and a tent space to share with nine other competitors.

Jax was also crowned the 2016 4 Deserts Female World Champion and accomplished this in honor of the LymeLight Foundation, raising under $18k for the charity.

In September 2018 she won the Grand To Grand Ultra in Utah / Arizona, USA and finished as 1st American Overall and 7th Overall!

In 2019 she had planned to run a stage race on the 6th continent.
But she had to put her running on hold because of an extensive bunion and hammertoe surgery on both feet.
She had to withdraw from the Track Ultra (522K self-supported race in Australia),  her attempt for the 6th continent stage race win.
But she’s back on her feet now and continuing training and running to accomplish her goal!

February 2021 she’ll run her 6th stage race on the 6th continent: the Beyond Ultimate Ice Ultra Stage Race in Swedish Lapland.  Laying inside the Arctic Circle it’s Europe’s last remaining wilderness and the heartland of the indigenous Sámi people.  This area, Jokkmokk municipality, an area the size of Wales but with a population of only around three thousand, can experience daytime temperatures as low as -40 degrees at this time of year and the days are short.

Imagine running in the snow, surrounded by seemingly endless pine forests scattered with frozen lakes.  White-capped mountains dominate the horizon.  All around you is silent and peaceful broken only by the crunch of your steps in the snow as you make your way through 230km of this UNESCO world heritage area. As darkness descends at the end of each day you can expect to feel like the only person on the planet.

In May 2021 Jax will complete her Seven Continents Challenge with The Track Ultra Stage Race in Australia.