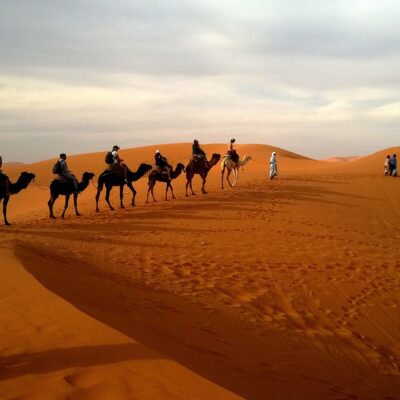 Agadez is the center of the Sahara, a town of a mostly Muslim population, landmarked by the tall Agadez Mosque, also known as the Grande Mosquée d’Agadez. “The gateway to the desert” was also the center for the caravan trade. Nowadays it’s the migration hub for people hoping for a better future in Europe.

Agadez Mosque was built in 1515 when the city was captured by the Songhai Empire. The 27 m tall minaret has served for centuries to watch out for enemies and invited caravans to Agadez. 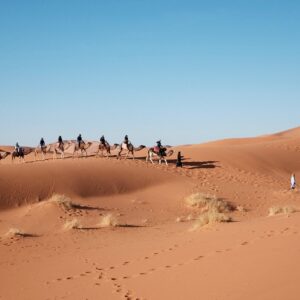 Trail across Sahara desert
Dakar, Senegal
Giza, Egypt
The Tuareg caravan is one of the two last salt caravan routes in the Sahara that are still in use. Both caravans have largely been replaced by unpaved truck routes. Each winter Tuareg caravans cross Niger’s Ténéré Desert to fetch salt from the Bilma oasis and barter millet for dates. The salt was then transported and traded in Koumbi Saleh, Niani, and Timbuktu for  ivory, hides, copper, iron, cereals, and even gold dust.  Salt was a scarce but highly valued and essential mineral when the Ténéré region became drier and fresh, salt containing plant food was hard to find. Salt was needed to stay hydrated in the hot desert, to preserve dried meat and to give food more flavor.  In...
Trail details 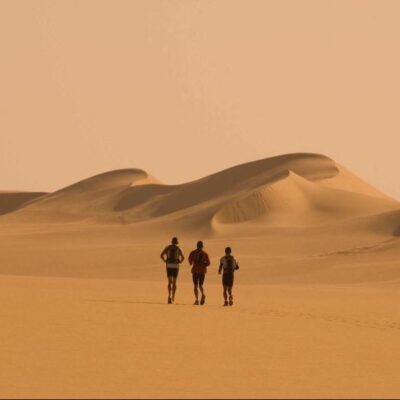 Running the Sahara
Nov 2, 2006
St. Louis, Senegal
Feb 20, 2007
Cairo, Egypt
In 2007 three men ran 72 kilometers a day across the Sahara for 111 consecutive days. “When I decided to run across the Sahara Desert with Ray Zahab and Kevin Lin, I knew it would be a life changing expedition. But I could never have known that, in many ways, my life would be defined by this run and the film about the journey,” says expedition leader Charlie Engle. While running more than 4,500 miles across Africa was a difficult physical challenge, we were buoyed daily by enlightening encounters that opened our eyes to the people and the culture of...
More info
No data was found