Being a heavy smoker and drinker Rory decided in January 1994 to live the rest of his life to the full with no more nicotine and alcohol.

In just three months he lost three stone in weight and ran a half-marathon.
“It was my local one in Stratford-upon-Avon, where in the past I’d stand outside my parent’s house with a pint of beer and a cigarette, and poke fun at the runners. Now I was one of them.”

Rory went on to complete his first full marathon later that same year in Telford, Shropshire.
“I ran the London Marathon in April 1995 and enjoyed the experience so much that I ran another marathon the following weekend, and the one after that, and have been doing so ever since. As I became a more experienced runner, the races became longer and the terrain became tougher.”

After running marathons every week for 23 years without any injuries Rory’s world suddenly collapsed.
“Unexpectedly, my horizons changed dramatically in April 2016 when I was left paralyzed after being struck down by Guillain-Barré Syndrome. I was left wheelchair-bound and my future was thrown upside down – it was unclear whether I would ever walk, let alone run again.”

“My recovery is ongoing but I have left doctors astounded at the speed of my progress. I believe it is a testament to both my determination and my fitness.

I passed my 1,000 marathon goal in September 2017 and hope to continue inspiring people to achieve the most out of their Sporting, Home and Business lives.”

His wife Jenny had a 1000 Marathon Trophy especially made for Rory by the same Glass Artist that creates the Trophies for the Marathon des Sables (MdS) with the following text:

A memorable day thanks to his family and friends, including Kevin Webber, who accompanied Rory the whole Robin Hood Marathon.

“What will you do when you reach the magic 1000?”
That’s the question that everyone’s been asking me and my reply has been very simple, “Well I’m going to carry on, as this is what I do and it’s what makes me – ME.” To be honest, I’m not sure what I’m meant to say about it but that’s the best I can offer so far, it’s just another marathon isn’t it? In reality, I’m past the 1000 and on with other life aspirations and life goals. Being stuck on 976 for so long last year was a real killer.

Hopefully on reading this, and if you know me well, you’ll get that…
You’ll get me, where I’m coming from and understand where I’ve been and what I’ve been doing all these years running 29,267.1 miles in marathon bite-sized chunks. Not necessarily physically but mentally. Someone recently described me as Durable and Enduring – it’s a fair assumption of my character and as I pass this marathon milestone, I think it’s important to convey what I’ve learned about myself over the years of running 26.2 miles or more every 8.35 days.

The BIG thing is I’ve learned is an inner calm and self-acceptance, especially following last year’s Guillain-Barré Syndrome escapade and I am fully aware that my running has been the most self-indulgent thing I could have possibly have done, in fact it’s been extremely self-indulgent and in some areas of my life, I’ve paid dearly. However, for it to be my therapy, it was the only way I could see of getting me through. I simply just wouldn’t still be here and it wouldn’t have been such a successful form of self-management and self-development if I hadn’t been so black or white without a single shade of grey (let alone 50 of them!) about the way I’ve conducted myself.

You see, when I left most of my life behind to sort out the mess I’d made and started running, folk thought I’d flipped. They did for a long time but as I started to succeed, made my mark, complete bigger challenges and stuck to my new life-resolutions folk noticed. It was such a liberating and positive experience. Projecting that positivity to others, has proven to be the real bonus and an unforeseen gift from my marathon experiences, especially from the mega-day pilgrimages. I now use this as the main theme in my daily Coaching Practice. Thank heavens for the internet as I now have a steady stream of daily emails and Facebook messages from folk wanting to know how to go about going through the same process of change and take the same radical paths I chose to take. It’s humbling that folk invite me into their inner worlds and let me help them regain control again. I love fixing people – being broken myself many times really helps.

It’s weird to have ended up being a teacher as I’d never set out to be one, or run a marathon, let alone 1000 of them. All I knew was that I needed to change and the moment I ran those first few steps, I knew I’d found my therapy and my salvation.”

“We seem to put limitations on everything, not just in running but in life generally. I think it’s good to get rid of them every now and then, and just to see what happens.“

“…. The Marathon count isn’t the important thing here, it’s been about me being happy with me and that’s what counts. Any achievement along the way has just a bonus and a bi-product of running 26.2 miles or more 999 times, so I’ve been lucky there too.

Changing and taking the plunge? Well, it’s not scary. It’s not. I found it to be an exhilarating, mind-expanding journey that I can wholeheartedly recommend. “It’s always better to regret something you’ve done rather than something you haven’t”, it’s one of my favorite mottoes and I’ve quoted it to many clients and to myself a thousand times over.

So, if you are teetering on the edge of the ‘Precipice of Change’, as I was all those marathons ago – pick a date, set yourself a goal (even one of jogging just 100 steps) and see where it takes you. You never know where it might lead, which is the exciting part and if you need some help to release you from your current nightmare or in need of a push to achieve a personal goal, PB or life-dream, then I’m your man.
Happy days…”

What an amazingly perfect day with my Family and Friends at the Robin Hood for my 1000th Marathon – @VassosA @BBCBreakfast @MarathonDSables pic.twitter.com/5Caxk6MlVC 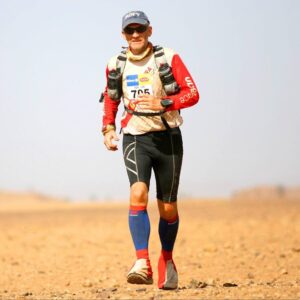 Rory Coleman
Rory knows the ups and downs of his transformation from being a heavy smoker and drinker to accomplishing 1,116 Marathons, 261 Ultras, 9 World Records, 15 Marathon des Sables & 27 Years Sober in November 2021. “I am a million miles from being the overweight 40-a-day smoker and hardened drinker that managed to run just 100 meters on 5th January, 1994. I decided there and then to live the rest of my life to the full, nicotine and alcohol-free. In just three months I lost three stone in weight and ran a half-marathon, going on to complete my first full marathon later that same year. I ran the London Marathon in April 1995 and enjoyed the experience so much that...
More Details
No data was found
Connect with 1000 marathons – Rory Coleman