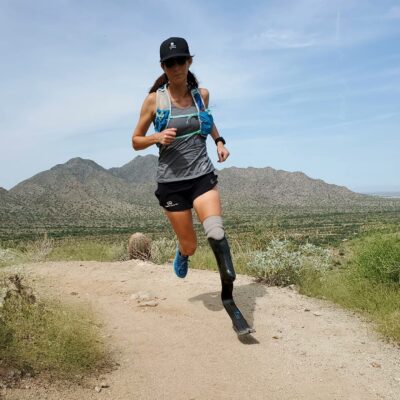 I’m hoping this will inspire others to get out of their comfort zones and try something new and truly see what you are capable of. You always got more to give. It doesn’t have to be as crazy, it just needs to push you a little out of your comfort zone. Maybe run your first 5km, half/full marathon or even take on your first ultra. Let me know what you will be doing this year to push yourself a little further.”

Jacky became an amputee runner in 2016. In 2001 Jacky was diagnosed with Ewing sarcoma, a rare cancer more typically seen in children. Overnight, a golf ball-sized bulge appeared on an old scar that had become tender. Within a month after the diagnosis her leg was amputated below the knee.”
The biggest struggle was accepting that part of my body was gone,” she said.

Subsequent marathons led to ultrarunning over extended distances, including a 100-mile (160-kilometer) race. Jacky also set a World Record for the First Amputee to run 100 miles on a treadmill and she ran it in under 24 hours (23hr38).

“I’ve been incredibly fortunate to be supported by some really wonderful brands that have helped me along the way, but not everyone is this fortunate. Running prosthetics are super expensive and not every amputee will have the opportunity to experience running as I have. It’s not as simple as putting on a pair of running shoes and you are out the door. Running prosthetic cost anything between 10 – 20 thousand dollars and many insurance companies see running as a “luxury” for amputees so they don’t always cover it.

If her streak remains intact heading into the Boston Marathon on April 18, it’ll be marathon No. 92.
Her original plan was to complete 100 marathons in a row t break the record of Alyssa Amos Clark, a non-disabled runner from Bennington, Vermont, USA, who covered the marathon distance 95 days in a row in 2000.

“I hoped it would inspire a lot of people to get out of their comfort zone and push a little bit farther,” she said.

“Running really changed my life,” Jacky says. “It helped me accept myself as an amputee. It gave me a sense of freedom. I fell in love with the process of pushing my body further just to see what I could do.”

The 46-year old badass covers each marathon in 5 hours on average.
The first two weeks were rough but then she got into a sustainable rhythm, taking care to ice and massage her stump. When it became swollen, she switched to a running prosthesis with a little more room.

“I am so amazed at how adaptable the body is,” she says. “After the first few days of running a marathon a day, my body really started to adapt and ‘harden’ to the mileage. My appetite, my muscles, my sleep–they all adjusted to the distance. My best advice is to listen to your body during a challenge like this to prevent injury.” 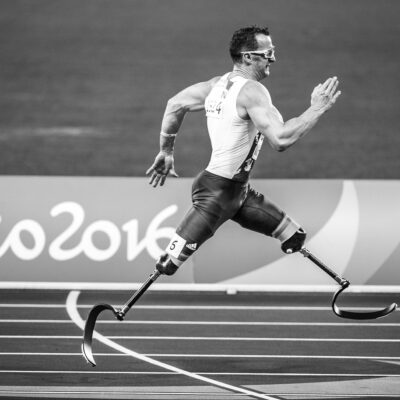