Family and Roman Footsteps Flooded by the Meuse 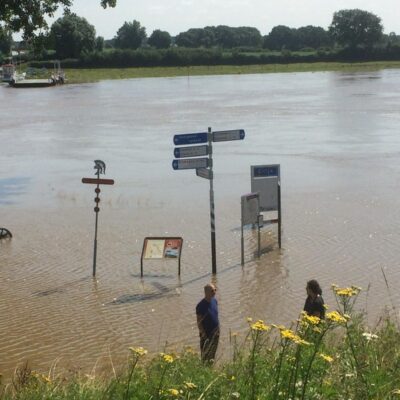 After my Loop around Nijmegen on May 29, it was time for the real challenge: my Run to Maastricht!

Why this route?
I think it’s a nice way to explore the history and culture and to follow the footsteps of my family from Maastricht to Nijmegen.

My grandfather and grandmother came from the south to settle with their family in various cities along the Maas. They then lived in Nijmegen until their death and were buried in Maastricht.

ROUTE
The route my family has taken over the years largely corresponds to how the Roman road ran between Nijmegen and Maastricht, the two oldest cities in the Netherlands, and I decided to follow this line from the Valkhofpark in Nijmegen to Cuijk, then descending as close as possible along the west side of the Maas to Maasbracht, and then further along the east side because I wanted to stay in the Netherlands to avoid Corona restrictions.

SCHEDULE
In September 2020 I was able to walk short distances again without suffering from injuries that I had been struggling with since 2016. Rory Coleman, an incredible runner and running coach friend offered to call every few weeks and gave me confidence again. For another amazing running friend, Pete Ripmaster, I promoted his virtual challenge and decided to take part myself as well, in which I was encouraged to run, cycle or walk a few miles each day.

I decided to take a part-time job as a postwoman as paid fitness during my lunch break. It was nice to alternate my daily website activities with more than 2 hours of walking and cycling and turned out to be a good structural alternative when the gym and sauna closed due to Corona.

I was able to organize my own times and worked independently and could therefore combine this safe Coronaproof job with my website and informal care.

Being outside and on the move every day also helped to put the persistent injuries behind me.
Running became enjoyable again and I dared to set running goals for 2021 again.

And last but not least, caregiving agencies HomeInstead and later ZZG Zorggroep increasingly took over the informal care from me, so that after years I could finally sleep normally again.

TRAINING
Training started on January 1.
I had hired a CTS coach Andy Jones-Wikins to get me ready for my adventure.
We decided on a weekly running schedule of 4 days so that I had enough time for work and informal care.

Once a week I ran at a leisurely pace with the Waalrunners when the Corona rules allowed us to. This fun club of runners turned out to be enthusiastic about my plans and some of them volunteered as crew to support me in my challenges.

In the beginning, the emphasis was more on interval training and tempo runs, but gradually the emphasis was shifted to long runs of up to 12 hours to prepare me for my 107K Round Nijmegen at the end of May, which laid the foundation for my Run to Maastricht.

Then at the beginning of July I ran the entire route from Nijmegen to Maastricht in 4 consecutive days with the help of some crew members in 4 stages of 42 km in order to explore the terrain, make any necessary adjustments and estimate the time needed for the entire route.
It was also a great opportunity to get to know the crew, show them the route and discuss logistics.

In addition to my weekly running training, I walked and cycled about 12 hours a week to deliver mail.
My physiotherapist provided the necessary relief with dry needling and massage after an intensive training.
Regular sauna visits and some strength training also helped when the gym reopened in summer 2021.

LOGISTICS
For my Loop around Nijmegen in May I had scheduled 1 or 2 people every 20 km to provide me with food, drinks, clothing, spare socks, shoes, cap, sunscreen, plasters, etc.

In addition to a few Waalrunners, a colleague postman, neighbor and 2 friends also offered to help or encourage them and I had found my brother and his family willing to get up early in the morning to provide me with the necessary support.

For my Run to Maastricht, part of the group had offered their help again and I had additionally invited other (running) friends to embark on this adventure together.

Because this time the route was from A to B, I had divided the crew as duos in time slots with 30 min overlap for relief so that they knew in advance how long their shift would last and it would not run late.

In a diagram I indicated between which 2 locations I would probably be during their shift and with a live link they could trace me on the route.

I provided each duo with a full cooler bag with instructions and carried a hydration pack myself so that in case of emergency / miss each other I still had enough to eat and drink.

CONCRETE PREPARATION
Besides the training, choosing and testing the right clothes, shoes, socks, running watch, apps for routing, live track and navigation, lighting, there were many aspects that I had no control over.

The Corona figures rose, some crew members had to drop out due to (fear for) their health and then, out of nowhere, the flood was there a few days before the planned start of my trip!

Extreme rainfall in large parts of Germany, Belgium and Limburg for several days flooded entire towns and villages, caused houses to collapse and even took lives of more than 200 people in the other 2 countries.

The Maas overflowed its banks and turned into a swirling mass, people were evacuated and from Maastricht to Nijmegen, right along my route, the regions turned into a major disastrous crisis area where no one was welcome except aid workers.

I considered postponing the adventure for a while but this was not easy because of the upcoming summer vacation of crew members and because I had no more days off. But above all, it seemed to me just now a reason to walk to draw attention to the seriousness and consequences of the situation.

I saw it as an opportunity to make us all more aware of the impact of climate change and that we must take our responsibility to prevent natural disasters and further degradation of the planet!

I moved the route inland so that it remained passable for the crew and without getting in the way of rescuers. I had to do this again several times because the situation was constantly changing.

Unfortunately, but completely understandable, some crew members nevertheless dropped out because they found it irresponsible to help in this situation. However, the rest of the crew was eager to continue so we decided to make the most of it and improvise where and when necessary.

IMPROVISATION
On the morning of departure, 17 July, the weather was beautiful and it hadn’t rained for over a day. The temperature quickly rose to 28 degrees and the humidity caused a lot of moisture loss. Chafing from the hydration pack under my clammy arms caused painful scrapes.

The first part to Cuijk went smoothly until we saw the first inaccessible road and had to swerve. This was repeated several times during the rest of the day and night because a barrier had been erected as a precaution or because it was a footpath that the crew’s car could not enter. In the end we followed a completely different route than the original and we hardly saw the Meuse, but it turned out that it didn’t matter much for the distance.

Mentally, however, it was exhausting for both the crew and me. It required an enormous amount of adaptability and resilience to keep having to stop and continue after consultation and review of the route.

I had an app that would guide me through the night with voice navigation, but the app didn’t say a word on the unchanged parts of the route and we had to navigate the rest of the trip based on current information.

In addition, the battery of my Garmin 245 did not work for 24 hours but only 14 hours and my running lights went out after 1.5 instead of the promised 15 hours. This despite the fact that all equipment was fully charged at the start.

The icing on the cake was that the police stopped us at 2 am. We were so far away from the crisis area that it couldn’t have anything to do with it but one of the crew members had come to the left side of the road to help me replace the lighting. He drove away as soon as he saw the following car. The police wondered if everything was okay. I explained the situation and the police were very interested and understanding.

However, it was once again a moment when I had to interrupt my run and it was getting harder and harder to ‘get back on my feet’.

The pace gradually decreased after 100km so that it eventually became a walk with a short trot every now and then. This is not what I had in mind and although it would have been no problem at all to walk the last 30km, it would soon take 6 hours while the crew was on their gums and still had to drive the way back to Nijmegen.

I kept trying to resume the pace, hoping it would get easier once it got light, but unfortunately it didn’t work.

I caught a cold and my stomach started to hurt, which was accompanied by extra sanitary stops, but I continued to eat and drink well. The discomfort passed but the lack of energy remained.

I was happy with what we had achieved under the extreme conditions, the experience gained, my new PR and the insights gained into myself and crew management and did not see how walking further 30km could add value to this.

I did feel a bit guilty because the next crew duo was already awake or on their way to take over from the current duo. I kept digging and tried a few more times to get into my rhythm but after having covered 130km in 21 hours I felt that there was no more left and that I had to be satisfied with what I had managed to achieve with the help of the crew.

Now, 3 weeks later, I still don’t regret this decision and I’m proud of what we managed to achieve together despite everything!

I feel for all people who suffered and still do from this disaster or even lost their loved ones! I hope they will recover from this situation soon!

On our own we can’t make a big change but together we can make huge steps forward!
Nature rules, running and enjoying the outdoors is not something to take for granted and we need to appreciate and be responsible for our planet to enjoy life and nature now and in the future. 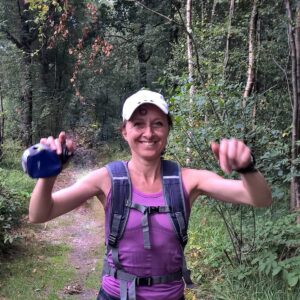 Merlijn Smeele
While completing over 25 races within 5 years, I learned how to cover and enjoy distances from 10 to 90K, without major injuries.  In 2017 I started training for more adventurous races abroad, including my first 100miler. Since my DNF (Did Not Finish) at the Javelina Jundred in October 2017, I’ve been on a humble journey to get back on track after a long-term injury. It took me three (!) years with many ups and downs, but since January 2021 I’m back in training and feel better and stronger than ever.  I enjoy the lifelong journey of gradual improvement, growing the distance, and learning to cope with challenges on the way.  There are many reasons why we want to run.Whether we like...
More Details
No data was found
Connect with Family and Roman Footsteps Flooded by the Meuse