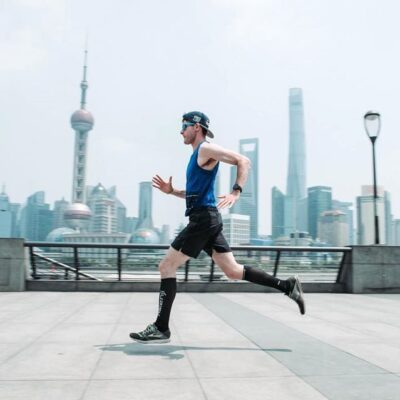 On May 25th 2019 Greg attempted to set the Fastest Known Time running between Shanghai’s two airports: Hongqiao and Pudong.

“It was a 35-mile (57KM) run across urban jungle – 3x longer than the distance between NYC’s LaGuardia and JFK – to traverse this sprawling city of 24 million. I covered the course in 5:46:00 to set the new #ShanghaiFKT.
It wasn’t pretty, but got it done! New Fastest Known Time running across Shanghai is 5 hours 46 minutes.”

June 26: “NYC FKT = Mission Accomplished! Fastest Known Time between JFK and LaGuardia Airport is now 1:27:45.
Departing JFK Terminal 7 takes you straight onto the Expressway which was terrifying and strong incentive to move fast. Legs responded well to the heat (88F/32C) and gentle slope as I rolled thru Queens and reeled in LaGuardia. Totally lucked out with green lights and only got stopped in 5 crosswalks during the 11 mile journey. Feeling great because everything clicked on #NYCFKT. Now for burger + shake + nap.”

Jun 30, 2019: “Came, Saw, Crawled to finish the DC FKT.
It was a 28.8 mile suffer-fest from Dulles to Reagan airport — a few miles in my foot caught a pothole on Old Ox Road (Virginia has some clowning street names) and my hip flexor tightened up. Stride began powering down and cramps set in quick with 90F heat. Now dehydrated, hammy was jack-hammering so I ducked into a gas station for AC and chugged a Gatorade while bringing heart-rate back down. Last ten miles on the Pain Train were real rough with lots of negative self-talk and no rhythm.
Hobbled to the finish in 4:26:51 and established the Fastest Known Time for a run between DC’s two airports. Lots of great runners in the Beltway so I don’t expect this record to last long.”

August 17: “Bund FKT = 1h 27m 55s. Tough day at the office with 101F/39C heat and humidity. Felt fantastic first 5k then knee stiffened (loose cobblestone argh) so had to really gut it without any bounce.
Feeling really blessed today; the encouragement means a lot, especially when I’m dragging on the course.”

August 29: “Montreal FKT is in the books! Covered 21.5km from the Airport onto Notre Dame Basilica in 1:29:55. Lots of road work and construction along the route so felt like a trail run. First time in the city and a really fun way to soak it in.”

“The Durian Double is done and dusted! New KL Airport to Petronas Towers FKT = 9:09:31.
Tough day at the office… legs were tight following Singapore run and the flight over. Lost my stride early on account of calf and quad tightness so battled to stay positive and keep shuffling forward.
Felt like a beast of burden under 11kilo ruck — shoulders and back ached from the weight, especially on the rolling hills. Definitely under-trained with the Ruck and it showed.

December 10: Mission Accomplished! London FKT = 2:01:23 Chilly 38 degrees at Heathrow Airport so went out fast to warm up. Legs responded and I felt strong pounding pavement over the 16 miles. Wind stung my hands and ears but tried to stay focused on deep breaths + long strides. It worked till I got disoriented on the homestretch; downtown London’s looping roads and gridlock traffic means lots of dodging and weaving… made a bone-headed turn that added an extra mile

2019 has been all about pushing my limits as a runner and wanted to see how I’d respond to a tough run with zero recovery. Excited that I stayed in the game mentally even when wheels came off physically. Lots of room for improvement moving forward and I’ll stay after it!”

Greg Nance
As a kid Greg spent lots of his family life outdoors.  Greg has run over 11 big ultra challenges all over the world, including the Atacama Crossing with his dad.  He survived a Mont Blanc snowstorm and went beyond limits during the World Marathon Challenge, where he completed 7 marathons in 7 days on 7 continents. He talks about living and running a business as a young entrepreneur in Asia, training in polluted air, preparing for multi-day races, building a training routine, the importance of sleep, rest and recovery, and small habits. Greg is co-founder of Moneythink, a not-for-profit that empowers under-resourced students to achieve college success, and he runs to spread his mission to break down the financial barriers...
More Details
No data was found
Connect with Greg Nance’s FKT Journey 2019