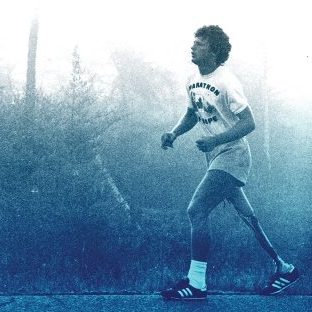 Terry Fox was diagnosed with bone cancer and forced to have his leg amputated above the knee when he was just 18.

Nevertheless Terry decided to run across Canada to raise money for cancer research. After 18 months of preparation, he started running close to a marathon a day.  In 143 days Terry covered 3,339 miles, from St John’s, Newfoundland, Canada’s easternmost city on the shore of the Atlantic,  through six provinces.
No mean achievement for an able-bodied runner, an extraordinary feat for an amputee. Terry believed that he had won his fight against cancer, and he wanted to raise money to fight the disease.

“How many people do something they really believe in? I just wish people would realize that anything’s possible if you try; dreams are made if people try. When I started this run, I said that if we all gave one dollar, we’d have $22 million for cancer research, and I don’t care man, there’s no reason that isn’t possible. No reason. I’d like to see everybody go kind of wild, inspired with the fund-raising,” Terry said.

He was the youngest Companion of the Order of Canada, the nation’s top civilian honor; he was named Newsmaker of the Year by the Canadian Press; he won the Lou Marsh Trophy for outstanding athletic achievement; his portrait was hung in the Sports Hall of Fame and letters of encouragement came from around the world; and, most importantly, donations to his Marathon of Hope reached $23.4 million. The Guinness Book of Records named him top fundraiser. A mountain was named after him in British Columbia.

On September 1, 1980 Terry was two-thirds of the way home when he had to give up his Marathon of Hope.
Terry died, his family beside him, June 28, 1981 – one month short of his twenty-third birthday.

There was nationwide mourning. Flags were flown at half-mast. But people didn’t forget him and his story didn’t end with his death. The first Terry Fox Run was held that September – more than 300,000 people walked or ran or cycled in his memory and raised $3.5 million.

Terry Fox changed people’s attitude towards the disabled, and he showed that while cancer had claimed his leg, his spirit was unbreakable.

Terry Fox Run
The Terry Fox Foundation continues where Terry had to stop.
Everyone is welcome to participate in the annual Terry Fox Run, regardless of age, athletic ability or socio-economic standing.
Walk, Run, Ride, Roller Blade at your own pace.
While the Run does not have an entry fee, fundraising or making a donation is very much appreciated and every dollar counts.

Terry Fox is not just a Canadian hero. Countries around the world stage annual events in support of Terry’s dream of finding a cure for cancer. Nearly all monies raised at Terry Fox Runs outside Canada are retained in the host country, funding cancer research projects at recognized research institutions approved by The Terry Fox Foundation on the advice of The Terry Fox Research Institute.