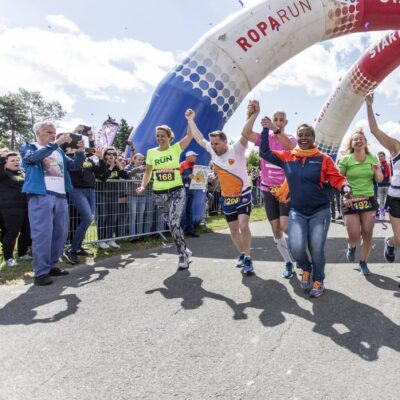 In 1991 Sjaak Bril wanted to run the Rotterdam Marathon but an injury got in the way and he had to give up. His friend Peter van der Noord belittled the marathon and claimed that it was only real if you ran to Paris. They made a bet to find out or it was possible and in 1992 the Rotterdam-Paris Run (RoPaRun) was born.

Sjaak and Peter decided to look for sponsors for this challenge, which went surprisingly well. After it was over, and after the expenses were deducted, it turned out they had 45,000 guilders left. They wanted to donate this amount to a good cause. The rooms in the Daniel den Hoed Hospital in Rotterdam needed telephones so that patients could phone home from their beds without having to walk into the hall to call. Several rooms also received a TV. This way they were able to make a small contribution to making a hospital stay just a bit more pleasant. That’s how the goal of the Roparun, palliative care for people with cancer, arose.

In the years that followed the Roparun kept growing, in both the number of teams and of volunteers who wanted to be involved in this fine goal. In 2004 it was decided to reverse the route and run from Paris to Rotterdam, so that there was room for more teams. The waiting list with registrations kept growing over the years, so that in 2012 it was decided to add an extra route to the Roparun. The Hamburg starting location has since become increasingly popular. Since 1992 the Roparun with just a few teams has grown into hundreds of teams and thousands of participants.

Over the years Sjaak and Peter moved into the background of the organization. In 2015 Sjaak spoke about his illness, the cruel cancer that had crept into his body. But Sjaak wouldn’t give up; he was taking on the fight, he said. He fought as long as he could against this adversary that was devouring him from within. And the man who couldn’t give up had to capitulate; Sjaak Bril died in 2017.

After taking a step back from his role in the organization in 2011, Peter passed away in 2019 after battling cancer as well.

The teams and the organization have grown substantially over the years. Seven permanent employees work at the foundation to organize Roparun. They’re doing this in collaboration with over 500 enthusiastic volunteers!

The Roparun is a relay race of over 500 kilometers from Paris and Bremen to Rotterdam, where people in teams, take part in an athletic event to raise money for people with cancer. It’s also called an adventure for life. This is also clear from the motto, which for years has been: ‘Adding life to days, when days often can’t be added to life’.