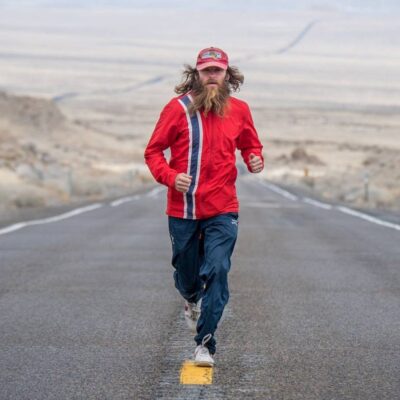 “My mom inspired me to do something special. She’s not with us anymore but she said: Do one thing in your life that makes a difference.
It’s quite vague, you’re not really sure what that’s going to be and you go through your life and you think Is this my difference?”

He now also holds a Guinness World Record for the fastest marathon completed while dressed as a film character.

Running America had been on his mind for years and then he heard that no-one ever really had run Forest Gump’s route from A to Z.
“When Forrest runs across the Mississippi for the fourth time, they say Why are you doing this?” Pope says. “Are you running for women’s rights, world peace, the homeless, the environment, or animals? I’m running for all five of those things.”
Forrest Gump doesn’t judge anyone, no matter their intelligence, race or background.
“If we were all a bit more like Forrest the world would be a better place,” Rob says.

Rob ran 15000 miles across America to raise both funds and awareness for the World Wildlife Fund and Peace Direct.

Along the way he had the hardest and greatest moments, including successfully proposing to his wife after almost losing the wedding ring, and becoming a proud father. 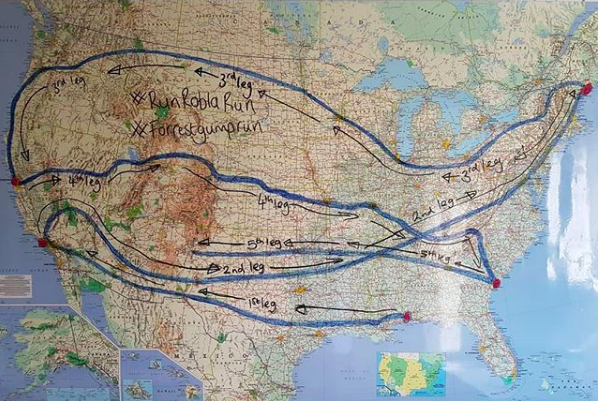 THE USA FORREST GUMP JOURNEY
Rob first ran from Mobile, Alabama all the way to Santa Monica Pier in Los Angeles, California. He then turned around and ran even further back across some 18 states to the Marshall Point Lighthouse in Maine. When he got there, he turned around and kept on running! He then became the first person ever to run across the United States of America THREE TIMES in a year since completing his third crossing in September 2017.

Nutrition
Rob fueled himself with whatever was available: hot dogs, chocolate, crisps, donuts, fizzy drinks, fast food, oatmeal, and each day a protein shake or milk. He didn’t lose any weight on the run!

Injuries
“In the first few weeks, I developed large blisters on the soles of both feet, which took up about a third of the sole, but they soon went and my feet were pretty hardy after that.

In terms of other injuries, I had tendinitis in both my anterior tibialis and my Achilles, tore a quad muscle, had a painful condition called piriformis syndrome, a groin strain which went chronic, and 5 days of food poisoning. Blisters were the least of my worries!”

Funding
“I funded the first three-and-a-half legs myself with life savings that should have gone on a house deposit, after the hoped-for sponsor didn’t materialize. Finances were a constant source of stress.”

Mindset
“I coped by just telling myself that I had to do it, removing the choice, and once I’d done that it was “easy”.
I’d focus on short and mid-term goals, ranging from crossing a state line to getting excited about lunch. I always had the big picture in mind, which was the finish and my fundraising efforts. My charities never stop, and neither do the problems they deal with, so why should I?”

He became the first person EVER to complete the run that Forrest Gump did in the film.
It’s a huge distance, the greatest distance anyone from the UK has ever run in a year, to serve a much more important purpose:

“The hard work is only just beginning though. The run was a means to bring awareness to the state of our planet and of those living in conflict. This is now my real run.
Please keep the donations coming in for the charities the World Wildlife Fund and Peace Direct – and every little bit helps.”
So share, donate or connect with Rob. 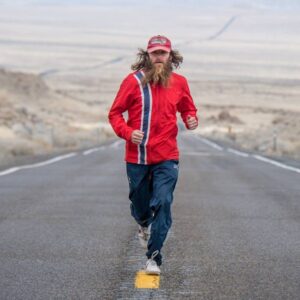 Rob Pope
Rob Pope is the first person ever to run across America four times in one year! “My mom inspired me to do something special. She’s not with us anymore but she said: Do one thing in your life that makes a difference.It’s quite vague, you’re not really sure what that’s going to be and you go through your life and you think Is this my difference?” Rob Pope is an emergency veterinarian by night and runner by day.No beginner marathon runner, Rob became the Australian Marathon Champion at the Australian Marathon Championships in 2015, won the Liverpool Rock ‘n’ Roll Marathon in 2015 and 2016, where he ran a personal best of 2:27:13. He also now holds a Guinness World...
More Details
No data was found
Connect with Run Robla Run – Rob Pope