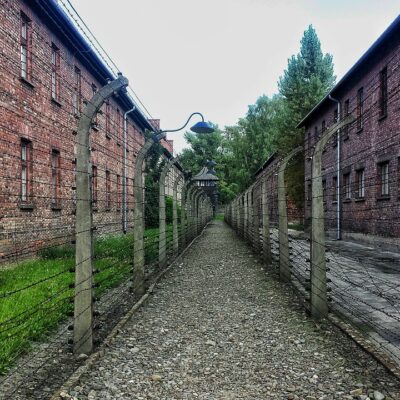 Sylvia Weiner runs up to 10 kilometers every day. Running isn’t just a way of life, it saved her life.
“Without running, my life would have slipped into some bad times,” Sylvia says.

During World War II the 12-year old Sylvia was transported between three concentration camps Majdanek, Auschwitz and Bergen-Belsen in Poland. She lost her parents and seven siblings, who were taken away to the Treblinka extermination camp.

More than 1 million people, mostly Jews and other perceived enemies of the Nazis died in Auschwitz. Many were gassed to death in the bathhouses, while others died from overwork, disease and insufficient nutrition.

In Bergen-Belsen Sylvia shared a barrack with Anne Frank. The two girls lay uncovered on the barrack’s bare floor, suffering from typhoid fever. “She was burning up with a fever, and I was getting better. I left the barrack one day, and when I returned, I was told she had died,” Sylvia remembers.

“I always wanted to live. I never believed I was going to survive. That I did, helped me move forward.”

Sylvia survived the camp and as a 16-year old girl she moved to Montreal to live with a relative and eventually married and had three children.

“There are memories from the camp I can never lose,” she says. “I told myself that it’s going to be like that for as long as l live so I tried to have a normal life.”

Her memories of the concentration camps were just too vivid and didn’t fade away. Flashbacks of the horror she witnessed kept interrupting her daily life, leaving her sleepless and anxious.

When she wanted to register her daughter in daycare at the YMHA Sylvia was told she had to be a member so she joined a fitness group. When she joined them for a short run around the park she felt exhausted but also really good, physically and emotionally, for the first time in years. Even though she still found it tough to breathe and she was the only woman, Sylvia made it a weekly activity ’cause running made her feel so much better than the prescribed tranquilizers and sleeping pills.

The running group met regularly and also trained for races. The founder Wolf Bronet, a fellow Holocaust survivor, encouraged Sylvia to train and qualify for the Boston Marathon, which had officially opened up to women in 1972.

So she started running with the “Wolf Pack” group three times a week. She reduced her doses of prescription drugs and eventually she didn’t need them anymore at all. “The running calmed me down,” Weiner says. “At first, I didn’t understand what others meant when they talked about the runner’s high, but then I started to feel elevated during runs, and the high lasted hours after my workout.”
Running became her life!

She ran 75 marathons, over 2,000 shorter races and more age-group titles than she can recount.
Although she doesn’t compete anymore, Sylvia still runs every day, even in the worst weather.

“I didn’t think I would live this long,” she says. “Time goes on. I’ve made good friends. Many of them runners. And it gives me a good feeling that I am accepted.”