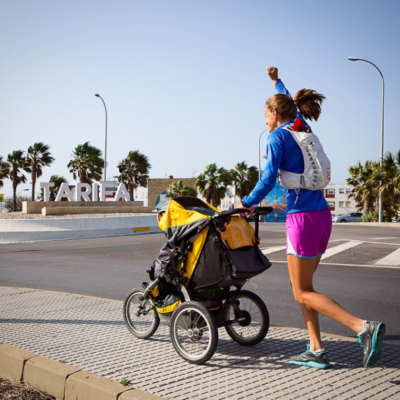 On 13 January 2015 Viv Jones finished her epic journey of 3,850km, having raised just over £10,000 for the Red Cross; the charity that helped her grandmother as a refugee.

“My grandmother, who passed away a couple of years ago, had been a German refugee after the Second World War – escaping her home in Neurese (now Unieradz in Poland) after the Russian invasion. Unaware if her family were alive or not, she survived a flight, a plane crash, and walked around 300km to finally settle in the German town of Celle. I wanted to see some of these places and the idea came to me organically, why not follow Grandma’s journey – but run it?”

After heartbreak and divorce following a 12 year relationship Viv needed a change and joined Run dem Crew, a running club in London. “Meeting new people and running with them motivated me to keep going every week, and running soon became an enjoyable habit.
At the same time I was thinking about a career break from my job as a consultant in the city. I wanted an adventure.”

So she decided to follow in her grandmother’s footsteps  and raise awareness and money for refugees.
And an adventure it was! She hadn’t run more than a half marathon before she started her 3,850km journey from Unieradz in Poland to Tarifa in Spain!
She calculated it would take her six months to complete, including mini breaks with family in Germany and France and one rest day a week.

So she put her stuff in a 35kg running buggy and took off.

“… I was nervous and excited as I started out on my first run. It was surreal knowing I was embarking on this big adventure, but running through the cobbled streets of the town where my gran was born and grew up made me feel closer to her.”

“In those first few days I felt all my stresses slip away, it was just me and the beautiful surroundings. Throughout the whole journey I didn’t need to worry about work or how I looked, I just had time to think and be ‘me’ on a really raw level.”

Despite her lack of experience, Viv managed to cover an average of 20 miles a day in a time frame of 3,5 up to 6 hrs, alternating running with walking and rotating two pairs of shoes to avoid injuries.

Her body gradually adapted and bananas, dried fruit and cereal bars  with water with electrolyte tablets fueled her daily runs.

“At night I’d camp or stay in B&Bs, or often people would find out what I was doing and offer me a free place to stay. The whole journey made me believe in the kindness of strangers – so many people would come up for a chat and then invite me for a meal in their home.

It wasn’t always easy, though. The hardest bit was spending six months alone. I’d meet lots of interesting people but I was always moving on so I couldn’t build relationships.”

Social media and podcasts helped Viv to cope with the lonely and tough moments when she felt like giving up.

In Spain she had to deal with IT band and Achilles injuries as well, but soon all she could think about was finishing.
“I told myself if I can take one step, I can keep going,” Viv says. “It isn’t called a challenge for nothing. I was going to end in Tarifa, a laid-back town at the southern tip of mainland Europe – the point where I couldn’t go any further.”

“I knew my mum was waiting for me and while I was prepared for an anti-climax, on that final day I just couldn’t stop smiling and whooping. Actually finishing I was elated, I ran into the sea.”

“This journey and challenge was dedicated to refugees worldwide. Everyone deserves to have a place they can call home.” –  Viv Joynes 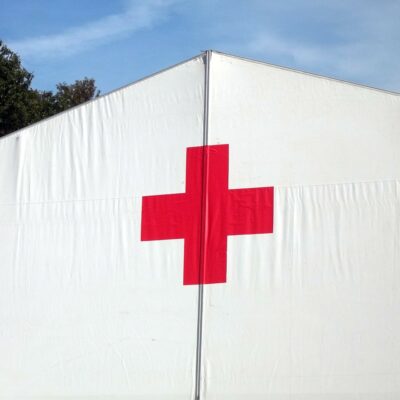 Red Cross
“On the ground in over 90 countries – neutral, impartial, and independent – we are the International Committee of the Red Cross”. 20,000 staff, 100 countries, 1 humanitarian mission: to uphold International humanitarian law and protect and assist people affected by conflict and violence.
More info
Connect with Viv Runs Europe – Viv Joynes