This National Historic Trail in Alaska is the only winter trail in the US National Trails System.
The main trail of 1,000 mile, also known as the Seward-to-Nome Trail, crosses several mountain ranges and valleys.
The additional 1,400 miles of side/connecting trails link communities and historic sites, and were established by Alaskan native Indians and Eskimos to connect their villages.

The trail served as a supply route during Alaska’s Gold Rush in 1910, and was used to transport mail carried by dogsleds.

Conditions are extreme with sub-zero temperatures and gale-force winds which can cause the wind chill to reach −100 °F (−73 °C). 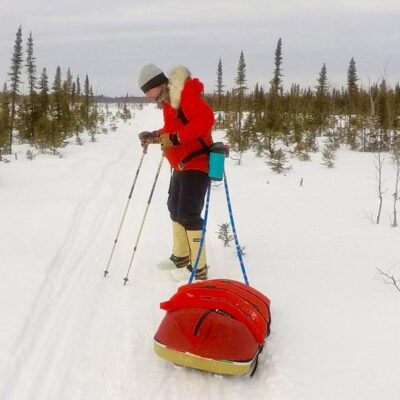 Iditarod Trail Invitational - Pete Ripmaster
Feb 25, 2018
Anchorage, Alaska
Mar 24, 2018
Nome, Alaska
Pete wanted to be a sled dog musher and moved to Alaska in the early 2000s to run dogs. But he found managing the dogs too overwhelming and in 2006 he and his wife moved to Asheville where he worked as a teacher and ran the Black Mountain Running Co. shop for several years. “I’ve battled depression and voices throughout my life, turning to running to help inspire a personal change. I ran my first marathon in 2008, and continue to push the boundaries of my physical and mental capabilities.” “I decided I wanted to run a marathon one day...
More info