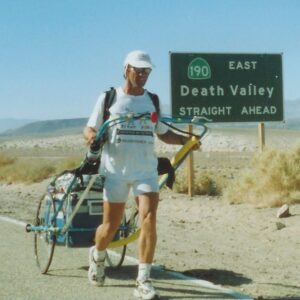 The ultimate endurance athlete, Marshall Ulrich has run more than 120 ultra marathons averaging over 125 miles each, completed 12 expedition-length adventure races, and climbed the Seven Summits all on his first attempts. He is the only person in the world to complete the Triple Crown of Extreme Sports: world-class ultra runner, record-setting adventure racer, and Seven Summits mountaineer.

Knowing that his wife and mother of their newborn daughter was going to die of cancer, Marshall’s heart rate went through the roof. To release the pressure he started running.

It helped him through the rest of his life to deal with the loss of his wife, his personal challenges of being a parent, to rediscover how to love later in life, as well as to overcome a mountain of self-doubt and insecurity. But it also let him explore the world and set numerous records by climbing the Seven Summits, running across America and Death Valley.

Besides four times winning the Badwater Ultramarathon, Marshall has crossed Death Valley on foot in July 28 times, including a self-contained, unaided solo “quad” of nearly 600 miles.
He also completed the first-ever self-supported circumnavigation of Death Valley National Park, about 425 miles in one of the hottest, driest places on earth, during the most blistering month in U.S. history (July 2012).

“Doing these events just for me doesn’t make any sense, so this year I’m running in honor of my first wife, Jean, who passed away in 1981 at age 30 from invasive breast cancer,” Marshall explains. Before getting sick, Jean completed law school, passing the bar exam when she was eight months pregnant. After Jean’s passing, the JEAN SCHMID ULRICH ENDOWED SCHOLARSHIP FUND was established at the University of Denver, her alma mater. Every year, an aspiring attorney is granted a scholarship. “We desperately need more honest, decent attorneys like Jean,” Marshall says.

He has ranked his record-setting transcontinental 52,5-day run of more than 3,000 miles from San Francisco to New York City as most challenging. It was the subject of his memoir, Running on Empty, where he also writes openly about his grief after the loss of his first wife.

Being in his sixties, Marshall inspires adventurers, active and armchair athletes, and a growing general audience by sharing his experiences and defying the ideas of “too far,” “too old,” and “not possible.”
“Discover what you’re made of; it’s more than you think!” 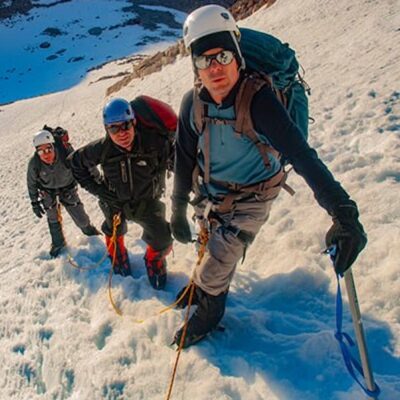 First Winter Badwater - Marshall Ulrich
Feb 21, 2021
Badwater, CA, USA
Feb 27, 2021
Mt Whitney, CA, USA
From February 21 through Feb 27, 2021, Marshall Ulrich completed the first-ever Winter Badwater in California, USA! The 69-year old running legend crossed the desert on foot from the Badwater Basin at 282 feet below sea level in Death Valley National Park to the Whitney Portal closure gate above Lone Pine, (the typical Badwater ultramarathon course), then climbed to the 14,508-foot summit of Mount Whitney via the Mountaineer’s Route. The lowest to the highest points in the continental US. Marshall completed this crossing in honor of his dear friend, and always and forever Stray Dog Mark Macy, who has early...
More info 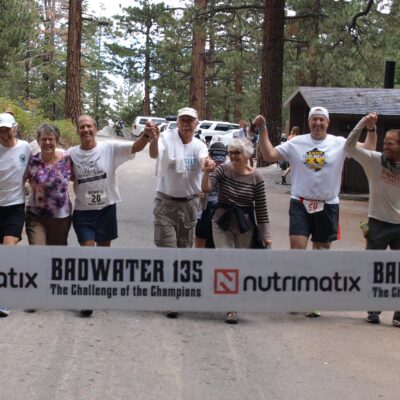 30th crossing of Death Valley in 30 years - Marshall Ulrich
Aug 24, 2020
Badwater, CA, USA
Aug 27, 2020
Mt Whitney, CA, USA
“I’m excited to announce my next adventure: the Death Valley 30/30. Thirty years ago, in 1990, I completed my first 146-mile crossing of Death Valley from Badwater to the summit of Mount Whitney. Now, 30 years later, I will attempt my 30th crossing of the Valley along the same route.” “In addition to completing twenty Badwater races – where I always did 146 miles to the summit, as intended to complete the “lowest to highest” in honor of Al Arnold and others – additional crossings include:- a 133 mile south to north crossing of (then) DV national monument- a solo,...
More info 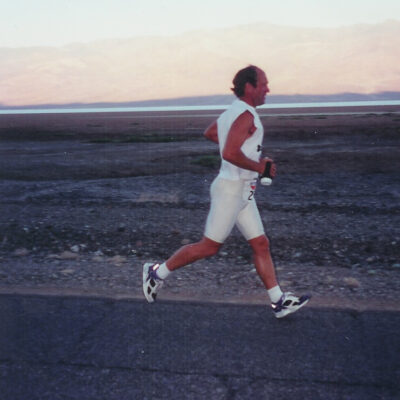 29th crossing of Death Valley in 29 years
Jul 22, 2019
Badwater, CA, USA
Jul 25, 2019
Mt Whitney, CA, USA
On July 22, 2019, Marshall Ulrich went up to the 14,505 foot summit of Mount Whitney to complete his 146 mile crossing from Badwater to the top of the mountain. It took him 78 hours. It was his 29th crossing of Death Valley in 29 years. Not bad for 68 years old! He had a great crew joining him including two of his children, Pete Kostelnick, Greg Pressler, Catra Corbett and Faye Guastamacchio.  Marshall has *always* completed the lowest (Badwater basin -282 feet) to highest (summit of Mount Whitney 14,505 feet) as done by Al Arnold back in 1977. It’s not a crossing if...
More info 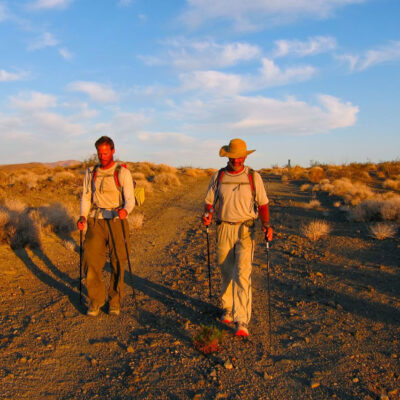 Circumnavigation Death Vally - Marshall Ulrich, Dave Heckman
Jul 22, 2012
Badwater, CA, USA
Aug 7, 2012
Badwater, CA, USA
When 38-year old firefighter Dave Heckman came up with the idea to circumnavigate the US Death Valley National Park during the hottest part of the Summer, completely unaided and unassisted, even the 61-year old accomplished adventurer Marshall Ulrich thought it was crazy and impossible.Nevertheless the two men began their journey of 425 miles on 22 July 2012. No one has attempted to circumnavigate the park, and certainly not during the heat of Summer when the threats of dehydration and heat stroke are dire, with temperatures exceeding 120 degrees Fahrenheit. Imagine remote areas, immense sand dunes, rock formations, salt flats, steep...
More info 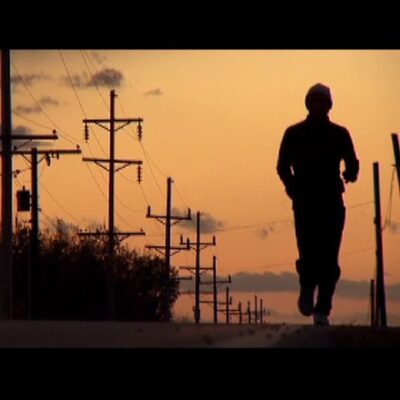 Running America - Marshall Ulrich, Charlie Engle
Sep 14, 2008
San Francisco, CA, USA
Nov 5, 2008
New York, NY, USA
Marshall Ulrich has run more than 100-foot races averaging over 100 miles each, completed 12 expedition-length adventure races, and ascended the Seven Summits, including Mount Everest, all on his first attempt. Yet his 3,063.2-mile run in 2008 from San Francisco to New York, the equivalent of running two marathons and a 10K every day for nearly two months straight, proved to be his most challenging effort yet.His journey across America at the age of 57, took him 52,5 days and 32 pairs of shoes. He took off with Charlie Engle, another legendary ultrarunner who became famous after Running the Sahara, but...
More info 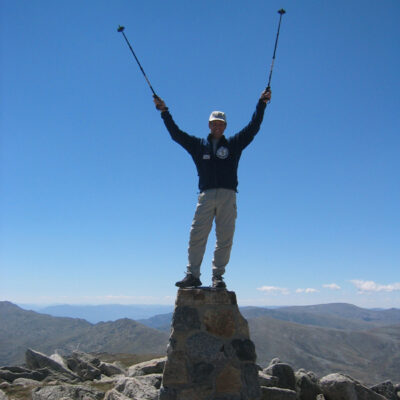 Seven Summits - Marshall Ulrich
Jun 16, 2002
Denali, AL, USA
Mar 10, 2005
Kosciusko, Australia
Having reached the top of each of the Seven Summits, including Mount Everest, all on first attempts and after the age of 50, Marshall Ulrich takes you to the top of each continent, highlighting the harsh, bitter cold environment in Antarctica and the extreme altitude and dangers of the north side of Mount Everest. Proving that health and wellness can extend into retirement, the beauty of the mountains serves as a backdrop for the audience to consider, “What is your mountain?” and “How will you choose to age?” Marshall had hoped to make an attempt to summit Everest in 2002,...
More info 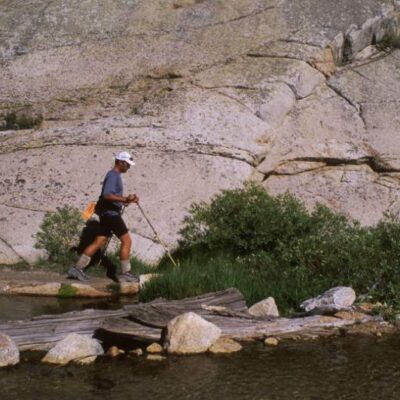 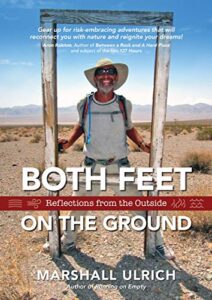 Both Feet on the Ground
Marshall Ulrich
“People have to get out to nature! It’s calming, nature gives us life basically. I think it’s essential to our psyche to get out,” Marshall says. It’s the topic of his latest book “Both Feet on the Ground,” which came out in Spring 2019.He addresses how food, nutrition & common-sense play a big role in his athletic accomplishments and how his connection to agriculture and nature is the glue that ties it all together. With everyone sheltering at home, this is a great time to read Both Feet on the Ground. In addition to reading about some of Marshall’s exciting adventures in...
Book details 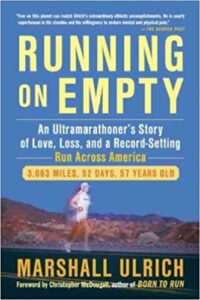 Running on Empty: An Ultramarathoner’s Story of Love, Loss, and a Record-Setting Run Across America
Marshall Ulrich
Filled with mind-blowing stories from the road and Marshall Ulrich’s sensational athletic career, this is an incredible read with a universal message for athletes and non-athletes alike: face the toughest challenges, overcome debilitating setbacks, and find deep fulfillment in something greater than achievement. “Riveting—the man has endured more, experienced more, accomplished more than you can imagine.”—AMBY BURFOOT, editor-at-large of Runner’s World. “An athlete of astonishing grit …”—MARK BURNETT, producer of Survivor, Eco-Challenge, The Apprentice, and others. “Marshall is The Man. Definitively … Nothing can stop him, and that gives us all hope, gives us resolve to keep trying.”—DEAN KARNAZES, ultra-distance runner and author of Ultramarathon Man. “Tempting...
Book details 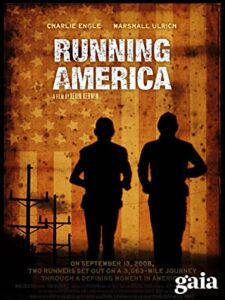 Running America
Kevin Kerwin
The documentary follows ultrarunners Marshall Ulrich and Charlie Engle as they attempt to set a new speed record for crossing the country on foot in 2008.
Movie details 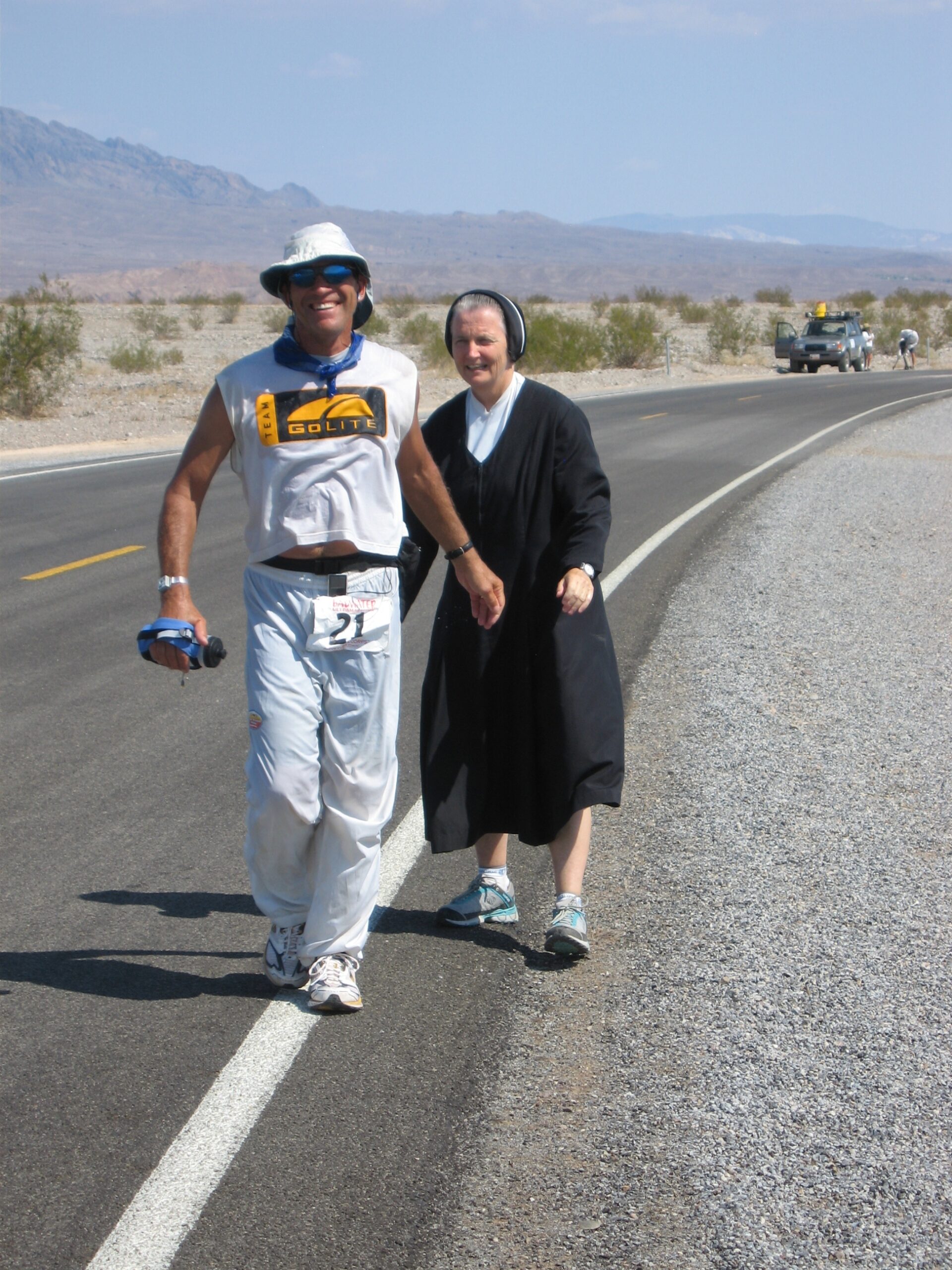 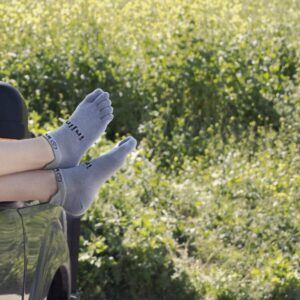 Injinji socks
“On the surface, Injinji is a California-based toesock company dedicated to the health and performance of feet. But deep down we are so much more. We are innovators, we are adventurers, we are lovers of all things active—most importantly, we are passionate about making the journey of life more comfortable. Our patented, five-toe sock design helps enhance the freedom and natural function of your foot inside any shoe, which means less time worrying about discomfort and more time for your next adventure. Wherever you go, there’s a toe sock to help you along the way.”
More info 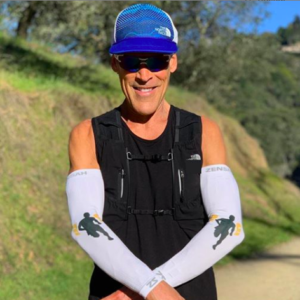 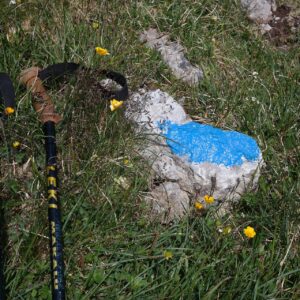 LEKI
Founder: Klaus Lenhart
CEO: Waltraud Lenhart
LEKI Lenhart GmbH is broadly recognized as the absolute world leader in pole and glove systems thanks to the consistent implementation of this philosophy. LEKI’s products are developed and designed together in Kirchheim/Teck, Germany and Tachov, Czech Republic. Poles are manufactured following modern and environmentally friendly processes in LEKI’s own production facility in the Czech Republic. LEKI products are characterized by a maximum of quality and longevity. Therefore, we offer the option to purchase replacement parts for a large number of our products. These are usually available for up to ten years after purchase. With a worldwide network of specialized service centers, our products can be repaired and reconditioned after wear and tear. LEKI is able to repair 93% of...
More info 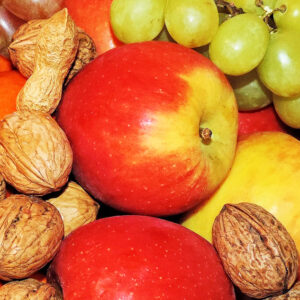 LÄRABAR
“It started out as just a hike, no different than countless others I’ve taken into the beautiful Rocky Mountains of Colorado. Little did I know I was about to come up with a mountain of an idea: combine simple ingredients such as fruits and nuts to create a food product that’s tasty, wholesome, and convenient.” The 20+ flavors are a simple blend of just 2-9 real ingredients like fruits, nuts, spices, and sometimes chocolate chips.
More info
Connect with Marshall Ulrich
Facebook Twitter Instagram Strava Link
DISCLAIMER: This website includes affiliate links of products and brands that are recommended by the runners community. It generates a small commission to support Trail Runners Connection if you purchase something through these links at no extra cost to you, without affecting our independence, topics or content.
We focus on products and services that contribute to a healthier, happier planet.